Most toxic effects are initiated by chemical interactions in which a foreign chemical or physical agent interferes with or damages normal chemicals of the body. This interaction results in a body chemical being unable to carry out its function in maintaining homeostasis.

There are many ways this can happen; for example:

Types of Physiological Chemicals
There are three categories of chemicals normally functioning in the body:

Elements
Elements are components of all chemical compounds. Of the 92 naturally occurring elements, only 20 are normally found in the body. Seven of these, carbon, oxygen, hydrogen, calcium, nitrogen, phosphorous, and sulfur make up approximately 99% of the human body weight. In most cases, the elements are components of inorganic or organic compounds. However, in a few cases the actual elements may enter into chemical reactions in the body, such as oxygen during cell respiration, sodium in neurotransmission, and arsenic and lead in impaired mitochondrial metabolism.


Inorganic Compounds
Inorganic compounds are important in the body and responsible for many simple functions. The major inorganic compounds are water (H2O), bimolecular oxygen (O2), carbon dioxide (CO2), and some acids, bases, and salts. The body is composed of 60–75% water. Oxygen is required by all cells for cellular metabolism and circulating blood must be well oxygenated for maintenance of life. Carbon dioxide is a waste product of cells and must be eliminated or a serious change in pH can occur, known as acidosis. A balance in acids, bases, and salts must be maintained to assure homeostasis of blood pH and electrolyte balance. 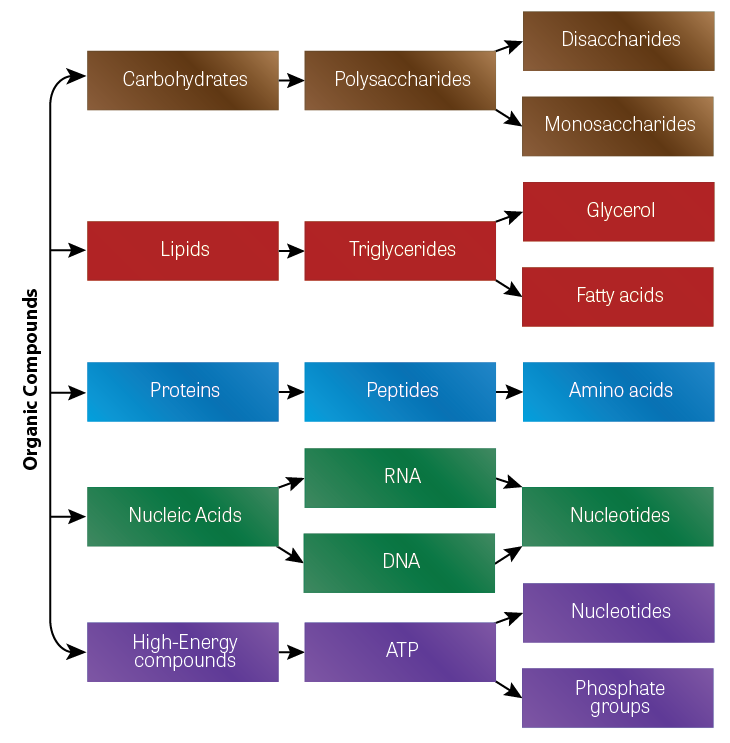 Figure 1. Organic compounds are involved in numerous structures and functions of biochemical processes in the body
(Image Source: NLM)
Carbohydrates
Most carbohydrates serve as sources of energy for the body. They are converted to glucose, which in turn is used by the cells in cellular respiration. Other carbohydrates become incorporated as structural components of genetic macromolecules.

Lipids
Lipids are essential substances of all cells and serve as a major energy reserve. They may be stored as fatty acids or as triglycerides. Other types of lipids are the steroids and phospholipids.

Proteins
The most diverse and abundant of organic compounds in the body is the group of proteins. There are about 100,000 different kinds of proteins, which account for about 20% of the body weight. The building blocks for proteins are the 20 amino acids, which contain carbon, hydrogen, oxygen, nitrogen, and sometimes sulfur. Most protein molecules are large and consist of 50–1000 amino acids bonded together in a very precise structural arrangement. Even the slightest change in the protein molecule alters its function.

Proteins perform a large variety of important functions. Some proteins have a structural function such as the protein pores in cell membranes, keratin in skin and hair, collagen in ligaments and tendons, and myosin in muscles.

A particularly important group of proteins are the enzymes.

Enzymes, which are catalysts, are compounds that accelerate chemical reactions, without themselves being permanently changed. Each enzyme is specific in that it will catalyze only one type of reaction. Enzymes are vulnerable to damage by xenobiotics and many toxic reactions occur by changing the shape of the enzyme ("denaturation") or by inhibiting the enzyme ("inhibition").


Nucleic Acids
Nucleic acids are large organic compounds that store and process information at the molecular level inside virtually all body cells. Three types of nucleic acids are present: Nucleic acids are very large molecules composed of smaller units known as nucleotides. A nucleotide consists of a pentose sugar, a phosphate group, and four nitrogenous bases. The sugar in DNA is deoxyribose while the bases are adenine, guanine, cytosine, and thymine. RNA consists of the sugar, ribose, plus the four bases adenine, guanine, cytosine, and uracil. These two types of molecules are known as the molecules of life. For without them, cells could not reproduce and animal reproduction would not occur.

DNA is in the nucleus and makes up the chromosomes of cells. It is the genetic code for hereditary characteristics. RNA is located in the cytoplasm of cells and regulates protein synthesis, using information provided by the DNA. Some toxic agents can damage the DNA causing a mutation, which can lead to the death of the cell, cancer, birth defects, and hereditary changes in offspring. Damage to the RNA causes impaired protein synthesis, responsible for many types of diseases. Figure 2 shows the structure of DNA and RNA. Note that DNA is double-stranded and known as the double helix. RNA is a single strand of nucleotides. 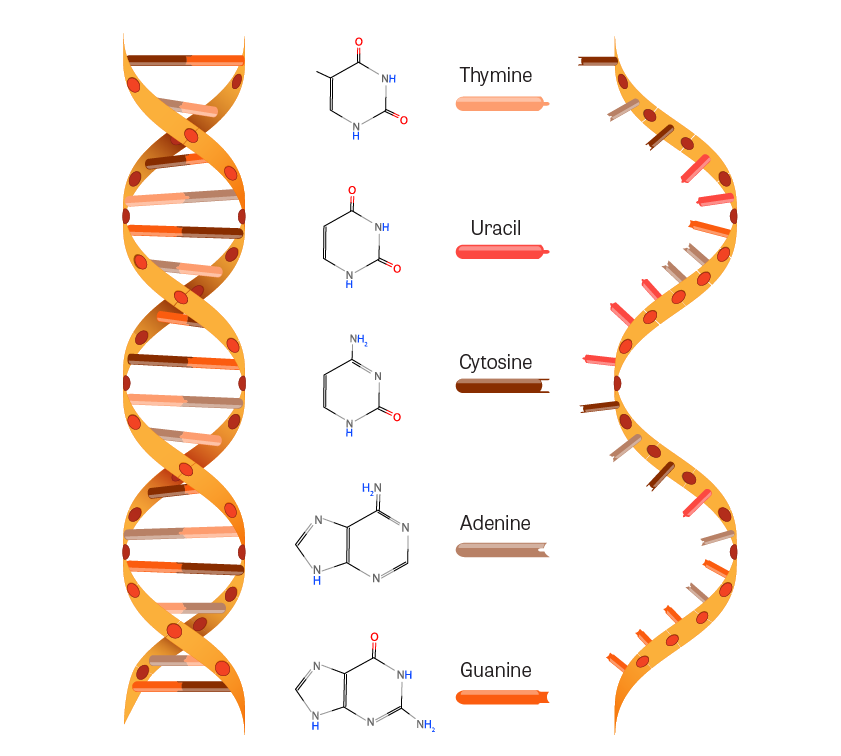 Figure 2. Structures of DNA and RNA
(Image Source: Adapted from iStock Photos, ©)
High-Energy Compounds
Adenosine triphosphate (ATP) is the most important high-energy compound. It is a specialized nucleotide located in the cytoplasm of cells that serves as a source of cellular energy. ATP contains adenine (amino acid base), ribose (sugar), and three phosphate groups. ATP is created from adenine diphosphate using the energy released during glucose metabolism. One of the phosphates in ATP can later be released along with energy from the broken bond induced by a cellular enzyme.

2) The nucleic acid located in the nucleus, which makes up the chromosomes of cells, is:
a) ATP
b) RNA
c) DNA