Toxic damage to cells can cause individual cell death and if sufficient cells are lost, the result can be tissue or organ failure, ultimately leading to death of the organism. It is nearly impossible to separate a discussion of cellular toxicity and biochemical toxicity. Most observable cellular changes and cell death are due to specific biochemical changes within the cell or in the surrounding tissue. However, there are a few situations where a toxic chemical or physical agent can cause cell damage without actually affecting a specific chemical in the cell or its membrane. Physical agents such as heat and radiation may damage a cell by coagulating their contents (similar to cooking). In this case, there are no specific chemical interactions. Impaired nutrient supply (such as glucose and oxygen) may deprive the cell of essential materials needed for survival.


Toxic Effects
The majority of toxic effects, especially due to xenobiotics, are due to specific biochemical interactions without causing recognizable damage to a cell or its organelles.
Examples of these toxic effects include: The human body is extremely complex. In addition to over 200 different cell types and about as many types of tissues, there are literally thousands of different biochemicals, which may act alone or in concert to keep the body functions operating correctly. To illustrate the cell's structures and functions and the chemical toxicity of all tissues and organs would be impossible in this brief tutorial. This section presents only a general overview of toxic effects along with some specific types of toxicity that include cancer and neurotoxicity.


Capacity for Repair
Some tissues have a great capacity for repair, such as most epithelial tissues. Others have limited or no capacity to regenerate and repair, such as nervous tissue. Most organs have a functional reserve capacity so that they can continue to perform their body function although perhaps in somewhat diminished ability. For example:

Toxic Damage to Cells and Tissues
Toxic damage to cells and tissues can be transient and non-lethal or, in severe situations, the damage may cause death of the cells or tissues. The following diagram illustrates the various effects that can occur with damage to cells. There are four main final endpoints to the cellular or biochemical toxicity: 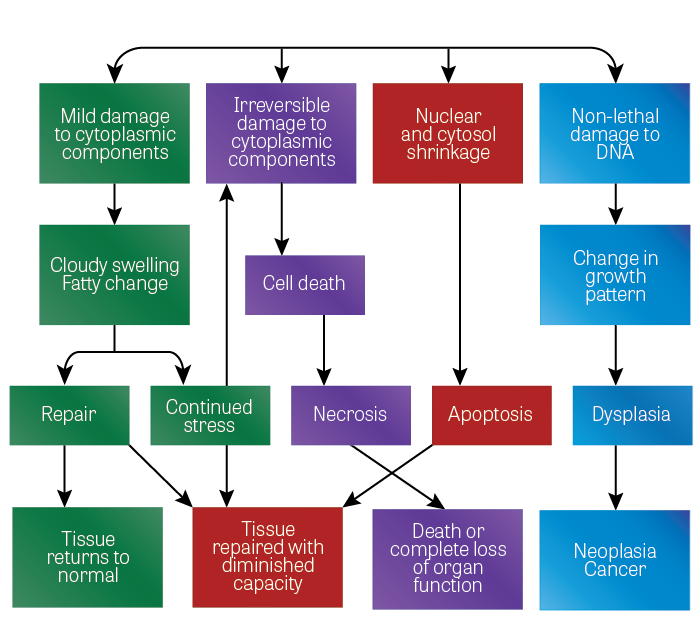 Reversible Cell Damage
The response of cells to toxic injury may be transient and reversible once the stress has been removed or the compensatory cellular changes are made. In some cases, the full capability of the damaged cells returns. In other cases, a degree of permanent injury remains with a diminished cellular or tissue capacity. In addition to the adaptive cell changes discussed previously, two commonly encountered specific cell changes are associated with toxic exposures, cellular swelling, and fatty change.

Cellular swelling, which is associated with hypertrophy, is due to cellular hypoxia, which damages the sodium-potassium membrane pump. This in turn changes the intracellular electrolyte balance with an influx of fluids into the cell, causing it to swell. Cell swelling is reversible when the cause is eliminated.

Fatty change is more serious and occurs with severe cellular injury. In this situation, the cell has become damaged and is unable to adequately metabolize fat. The result is that small vacuoles of fat accumulate and become dispersed within the cytoplasm. While fatty change can occur in several organs, it is usually observed in the liver. This is because most fat is synthesized and metabolized in liver cells. Fatty change can be reversed but it is a much slower process than the reversal of cellular swelling.

Lethal Injury (Cell Death)
In many situations, the damage to a cell may be so severe that the cell cannot survive. Cell death occurs mainly by two methods: necrosis and apoptosis.

Necrosis is a progressive failure of essential metabolic and structural cell components usually in the cytoplasm. Necrosis generally involves a group of contiguous cells or occurs at the tissue level. Such progressive deterioration in structure and function rapidly leads to cell death or "necrotic cells." Necrosis begins as a reduced production of cellular proteins, changes in electrolyte gradient, or loss of membrane integrity (especially increased membrane permeability). Cytoplasmic organelles (such as mitochondria and endoplasmic reticulum) swell while others (especially ribosomes) disappear. This early phase progresses to fluid accumulation in the cells making them pale-staining or showing vacuoles, which pathologists call "cloudy swelling" or "hydropic degeneration." In some cells, they no longer can metabolize fatty acids so that lipids accumulate in the cytoplasmic vacuoles, referred to as "fatty accumulation" or "fatty degeneration." In the final stages of "cell dying," the nucleus becomes shrunken (pyknosis) or fragmented (karyorrhexis).

Apoptosis or "programmed cell death" is a process of self-destruction of the cell nucleus. Apoptosis is an individual or single cell death in that dying cells are not contiguous but are scattered throughout a tissue. Apoptosis is a normal process in cell turnover in that cells have a finite lifespan and spontaneously die. During embryonic development, certain cells are programmed to die and are not replaced, such as the cells between each developing finger. If the programmed cells do not die, the fetus ends up with incomplete or fingers joined together in a web fashion.

In apoptosis, the cells shrink from a decrease of cytosol and the nucleus. The organelles (other than the nucleus) appear normal in apoptosis. The cell disintegrates into fragments referred to as "apoptotic bodies." These apoptotic bodies and the organelles are phagocytized by adjacent cells and local macrophages without initiation of an inflammatory response as is seen in necrosis. The cells undergo apoptosis and just appear to "fade away." Some toxicants induce apoptosis or, in other cases, they inhibit normal physiological apoptosis.

Following necrosis, the tissue attempts to regenerate with the same type of cells that have died. When the injury is minimal, the tissue may effectively replace the damaged or lost cells. In severely damaged tissues or long-term chronic situations, the ability of the tissue to regenerate the same cell types and tissue structure may be exceeded, so that a different and imperfect repair occurs. 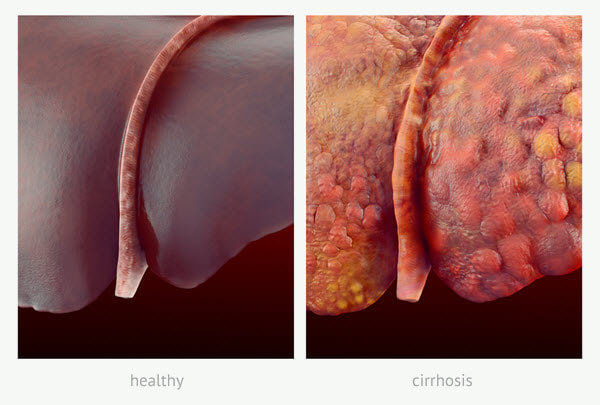 Figure 2. A healthy liver (left) and a liver with cirrhosis (right)
(Image Source: Adapted from iStock Photos, ©)
We have so far discussed primarily changes to individual cells. However, a tissue and an organ consist of different types of cells that work together to achieve a particular function. As with a football team, when one member falters, the others rally to compensate. It is the same with a tissue. Damage to one cell type prompts reactions within the tissue to compensate for the injury. Within organs, there are two basic types of tissues: the parenchymal and stromal tissues. The parenchymal tissues contain the functional cells (for example, squamous dermal cells, liver hepatocytes, and pulmonary alveolar cells). The stromal cells are the supporting connective tissues (for example, blood vessels and elastic fibers).


Cell Repair
Repair of injured cells can be accomplished by either:
The goal of the repair process is to fill the gap that results from the tissue damage and restore the structural continuity of the injured tissue. Normally a tissue attempts to regenerate the same cells that are damaged; however, in many cases, this cannot be achieved so that replacement with a stromal connective tissue is the best means for achieving the structural continuity.

The labile cells have a great potential for regeneration by replication and repopulation with the same cell type so long as the supporting structure remains intact. Stable cells can also respond and regenerate but to a lesser degree and are quite dependent on the supporting stromal framework. When the stromal framework is damaged, the regenerated parenchymal cells may be irregularly dispersed in the organ resulting in diminished organ function. The tissue response for the labile and stable cells is initially hyperplasia until the organ function becomes normal again. When permanent cells die they are not replaced in kind but instead connective tissue (usually fibrous tissue) moves in to occupy the damaged area. This is a form of metaplasia.

Examples of replacement by metaplasia are: 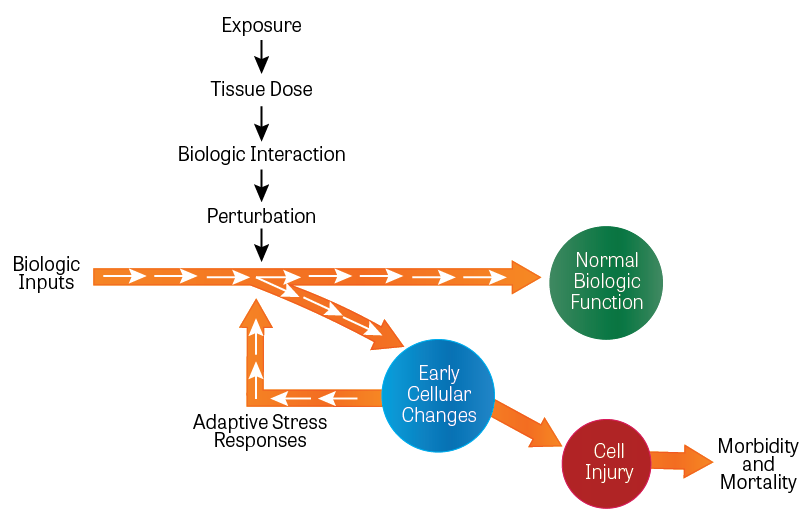 1) The process of self-destruction of the cell nucleus (often referred to as "programmed cell death") is known as:
a) Necrosis
b) Apoptosis
c) Cellular swelling
d) Fatty change

2) The category of cells that routinely divide and replace cells that have a limited lifespan is known as:
a) Labile cells
b) Stable cells
c) Permanent cells