Cells are the smallest component of the body that can perform all of the basic life functions. Each cell performs specialized functions and plays a role in the maintenance of homeostasis. While each cell is an independent entity, it is highly affected by damage to neighboring cells. These various cell types combine to form tissues, which are collections of specialized cells that perform a relatively limited number of functions specific to that type of tissue. Several trillion cells make up the human body. These cells are of various types, which can differ greatly in size, appearance, and function.

Primary Cell Components
While there are approximately 200 types of cells, they all have similar features: cell membrane, cytoplasm, organelles, and nucleus. The only exception is that the mature red blood cell does not contain a nucleus. Toxins can injure any of the components of the cell causing cell death or damage and malfunction.

Figure 1 shows the various components of a composite cell. 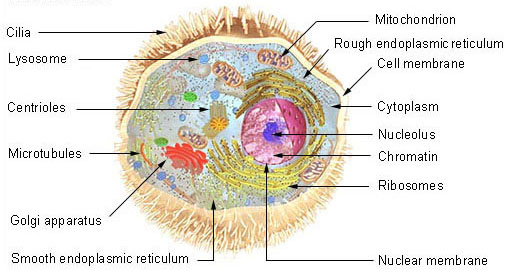 The primary components of a typical cell include the following:

Cell Components Most Susceptible to Xenobiotics
While all components of the cell can be damaged by xenobiotics or body products produced in reaction to the xenobiotics, the components most likely to be involved in cellular damage are the cell membrane, nucleus, ribosomes, peroxisomes, lysosomes, and mitochondria.

Agents that can lead to changes in the permeability of the membrane and the structural integrity of a cell can damage cell membranes. The movement of substances through cell membranes is precisely controlled to maintain homeostasis of the cell. Changes in toxin-induced cell membrane permeability may directly cause cell death or make it more susceptible to the entrance of the toxin or to other toxins that follow. The effects in this case may be cell death, altered cell function, or uncontrolled cell division (neoplasia).

Nuclei contain the genetic material of the cell (chromosomes or DNA). Xenobiotics can damage the nucleus, which in many cases lead to cell death, by preventing its ability to divide. In other cases, the genetic makeup of the cell may be altered so that the cell loses normal controls that regulate division. That is, it continues to divide and become a neoplasm. How this happens is described in the Cancer section of ToxTutor.

Ribosomes use information provided by the nuclear DNA to manufacture proteins. Cells differ in the type of protein they manufacture. For example, the ribosomes of liver cells manufacture blood proteins whereas the ribosomes of fat cells manufacture triglycerides. Ribosomes contain RNA, structurally similar to DNA. Agents capable of damaging DNA may also damage RNA. Thus, toxic damage to ribosomes can interfere with protein synthesis. In the case of damage to liver cell ribosomes, a decrease in blood albumin may result with impairment in the immune system and blood transport.

Lysosomes contain digestive enzymes that normally function in the defense against disease. They can break down bacteria and other materials to produce sugars and amino acids. When xenobiotics damage lysosomes, the enzymes can be released into the cytoplasm where they can rapidly destroy the proteins in the other organelles, a process known as autolysis. In some hereditary diseases, the lysosomes of an individual may lack a specific lysosomal enzyme. This can cause a buildup of cellular debris and waste products that is normally disposed of by the lysosomes. In such diseases, known as lysosomal storage diseases, vital cells (such as in heart and brain) may not function normally resulting in the death of the diseased person.

Peroxisomes, which are smaller than lysosomes, also contain enzymes. Peroxisomes normally absorb and neutralize certain toxins such as hydrogen peroxide (H2O2) and alcohol. Liver cells contain considerable peroxisomes that remove and neutralize toxins absorbed from the intestinal tract. Some xenobiotics can stimulate certain cells (especially liver) to increase the number and activity of peroxisomes. This, in turn, can stimulate the cell to divide. The xenobiotics that induce the increase in peroxisomes are known as "peroxisome proliferators." Their role in cancer causation are discussed in the Cancer section of ToxTutor.

Mitochondria provide the energy for a cell (required for survival), by a process involving ATP synthesis. If a xenobiotic interferes with this process, the death of the cell will rapidly ensue. Many xenobiotics are mitochondrial poisons.

1) There are several different types of cellular organelles. The very small structures (fixed to the endoplasmic reticulum or free within the cytoplasm) that consist of RNA and proteins, and function in protein synthesis, are:
a) Nucleus
b) Peroxisomes
c) Lysosomes
d) Ribosomes

2) The organelle that produces nearly all (95%) of the energy required by the cell is the:
a) Nucleolus
b) Golgi apparatus
c) Mitochondria
d) Centioles