Absorption Variability
Absorption varies greatly by specific chemicals and the route of exposure. Several factors affect the likelihood that a xenobiotic will be absorbed. The most important factors are the: The route of exposure influences how the concentration and properties of the substance vary. In some cases, a high percentage of a substance may not be absorbed from one route whereas a low amount may be absorbed via another route. Due to such route-specific differences in absorption, xenobiotics are often ranked for hazard in accordance with the route of exposure. A substance may be categorized as relatively non-toxic by one route and highly toxic via another route.

Cell Membranes
Cell membranes (often referred to as plasma membranes) surround all body cells and are similar in structure. They consist of two layers of phospholipid molecules arranged like a sandwich, referred to as a "phospholipid bilayer." Each phospholipid molecule consists of a phosphate head and a lipid tail. The phosphate head is polar, meaning it is hydrophilic (attracted to water). In contrast, the lipid tail is lipophilic (attracted to lipid-soluble substances).

The two phospholipid layers are oriented on opposing sides of the membrane so that they are approximate mirror images of each other. The polar heads face outward and the lipid tails face inward in the membrane sandwich (Figure 2).

Figure 2. Each phospholipid molecule consists of a phosphate head and lipid tail
(Image Source: Adapted from Wikimedia Commons, obtained under Public Domain, original image)
The cell membrane is tightly packed with these phospholipid molecules interspersed with various proteins and cholesterol molecules. Some proteins span across the entire membrane which can create openings for aqueous channels or pores.

A typical cell membrane structure is illustrated in Figure 3.

Figure 3. Typical cell membrane structure (Image Source: Adapted from Wikimedia Commons, obtained under Public Domain, original image)
Role of Cell Membranes in Absorption
For a xenobiotic to enter the body (as well as move within, and leave the body) it must pass across cell membranes (cell walls). Cell membranes are formidable barriers and a major body defense that prevents foreign invaders or substances from gaining entry into body tissues. Normally, cells in solid tissues (such as skin, or mucous membranes of the lung or intestine) are so tightly compacted that substances cannot pass between them. This requires that the xenobiotic have the ability to penetrate cell membranes. It must cross several membranes to go from one area of the body to another.

Animation 1 depicts how a chemical from a theoretical consumer product called a "Shower Gel" might get to the surface of the skin during showering and then pass through several membranes before coming in contact with the inside of a liver cell.
Animation 1. From a Gel to a Cell: Following the journey of a chemical from a theoretical shower gel product through several membranes and ultimately into a cell
(Image Source: iStock Photos, ©)

Movement of Toxicants Across Cell Membranes
Some toxicants move across a membrane barrier with relative ease while others find it difficult or impossible. Those that can cross the membrane use one of two general methods: 1) passive transfer or 2) facilitated transport.
Passive transfer consists of simple diffusion (or osmotic filtration) and is "passive" because no cellular energy or assistance is required.
Some toxicants cannot simply diffuse across the membrane but require assistance by specialized transport mechanisms. The primary types of specialized transport mechanisms are:

Passive Transfer
Passive transfer is the most common way that xenobiotics cross cell membranes. Two factors determine the rate of passive transfer: Properties affecting a chemical substance's ability for passive transfer are: Substances with high lipid solubility readily diffuse through the phospholipid membrane. Small water-soluble molecules can pass across a membrane through the aqueous pores, along with normal intracellular water flow.

Large water-soluble molecules usually cannot make it through the small pores, although some may diffuse through the lipid portion of the membrane, but at a slow rate.
In general, highly ionized chemicals have low lipid solubility and pass with difficulty through the lipid membrane.

Figure 4 demonstrates the passive diffusion and filtration of xenobiotics through a typical cell membrane. 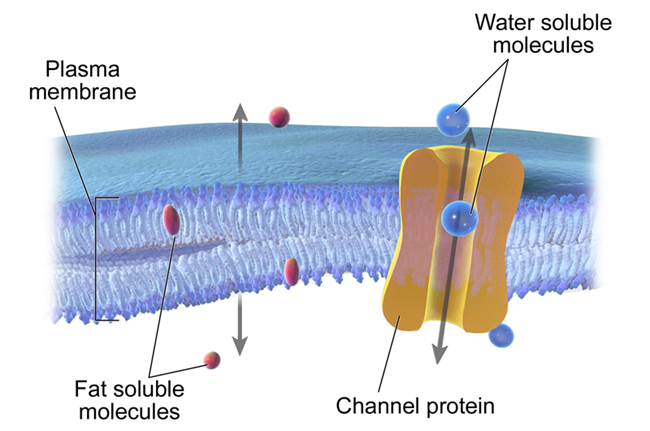 Facilitated diffusion is similar to simple diffusion in that it does not require energy and follows a concentration gradient. The difference is that it is a carrier-mediated transport mechanism (Figure 5)—that is, special transport proteins, which are embedded within the cell membrane, facilitate movement of molecules across the membrane. The results are similar to passive transport but faster and capable of moving larger molecules that have difficulty diffusing through the membrane without a carrier. 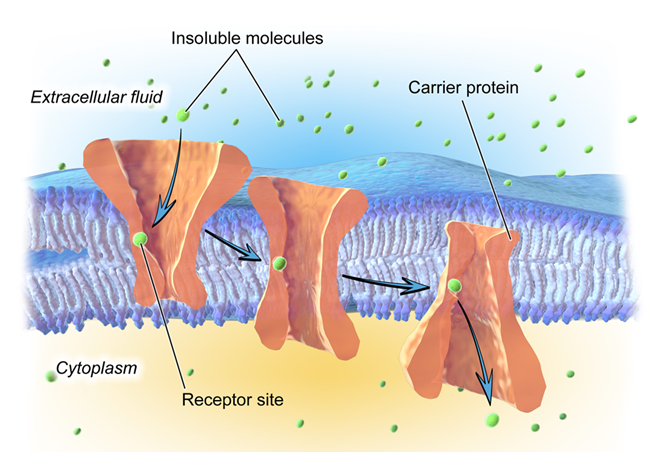 Active Transport
Some substances are unable to move with diffusion, unable to dissolve in the lipid layer, and are too large to pass through the aqueous channels. For some of these substances, active transport processes exist in which movement through the membrane may be against the concentration gradient, that is, from low to higher concentrations. Cellular energy from adenosine triphosphate (ATP) is required in order to accomplish this. The transported substance can move from one side of the membrane to the other side by this energy process. Active transport is important in the transport of xenobiotics into the liver, kidney, and central nervous system and for maintenance of electrolyte and nutrient balance.

Figure 6 shows sodium and potassium moving against concentration gradient with the help of the ATP sodium-potassium exchange pump. 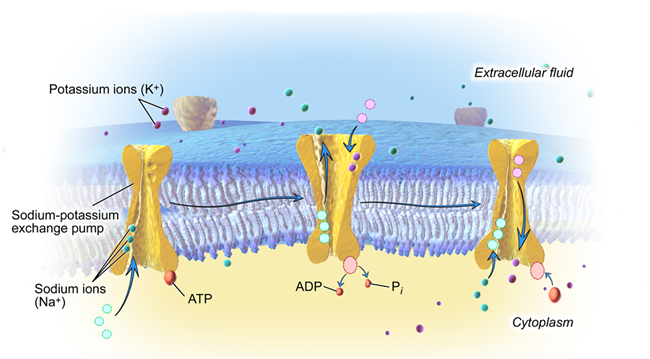 Endocytosis (Phagocytosis and Pinocytosis)
Many large molecules and particles cannot enter cells via passive or active mechanisms. However, some may still enter by a process known as endocytosis.

In endocytosis, the cell surrounds the substance with a section of its cell wall. This engulfed substance and section of membrane then separates from the membrane and moves into the interior of the cell. The two main forms of endocytosis are 1) phagocytosis and 2) pinocytosis.

In phagocytosis (cell eating), large particles suspended in the extracellular fluid are engulfed and either transported into cells or are destroyed within the cell. This is a very important process for lung phagocytes and certain liver and spleen cells.

Pinocytosis (cell drinking) is a similar process but involves the engulfing of liquids or very small particles that are in suspension in the extracellular fluid.

Figure 7 demonstrates the types of membrane transport by endocytosis.

1) The process whereby a substance moves from outside the body into the body is known as:
a) Distribution
b) Biotransformation
c) Absorption

3) The basic structure of the cell membrane consists of:
a) A thick protein layer containing phospholipid channels
b) A bilayer of phospholipids with scattered proteins within the layers
c) Cholesterol outer layer with a phospholipid inner layer

4) The membrane transport process by which large hydrophobic molecules cross membranes via the lipid portion of the membrane, follow the concentration gradient, and do not require energy or carrier molecules is known as:
a) Simple diffusion
b) Active transport
c) Facilitated diffusion

5) Endocytosis is a form of specialized membrane transport in which the cell surrounds the substance with a section of its cell membrane. The specific endocytosis process by which liquids or very small particles are engulfed and transported across the membrane is known as:
a) Phagocytosis
b) Pinocytosis
c) Exocytosis