The human body have mechanisms to detect and repair the various types of damage that can occur to DNA, no matter whether this damage is caused by the environment or by errors in replication.
Because DNA is a molecule that plays an active and critical role in cell division, during the cell cycle, checkpoint mechanisms ensure that the DNA is intact before permitting DNA replication and cell division to occur. Failures in these checkpoints can lead to an accumulation of damage, which in turn leads to mutations.

UV radiation causes DNA lesions that may distort DNA's structure, introducing bends or kinks and thereby impeding transcription and replication. These lesions may be repaired through a process known as nucleotide excision repair (NER), a mechanism where a  enzyme catalyze the removal of damaged nucleotides, and replacement of the correct sequence, guided by the intact complementary DNA strand. Defects in this mechanism is related to human diseases like  skin cancer. 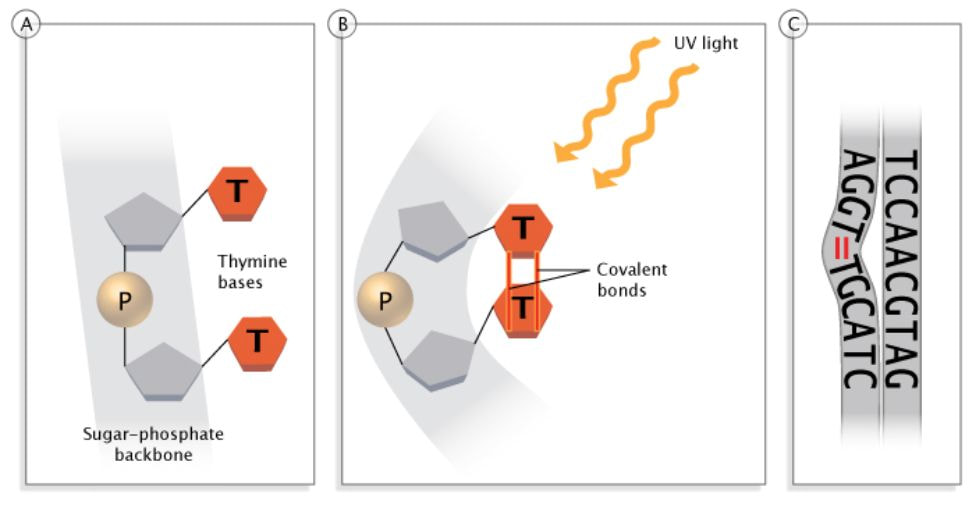 Figure 9. UV Radiation can distort DNA, impeding transcription and replication. A region of DNA is shown before (A) and after (B) its structure is distorted by UV radiation. The distortion in panel B is due to a convex bend in one strand (C). - Source: © Nature Education
Another repair mechanism that handles the spontaneous DNA damage caused oxidation or hydroxylation generated by metabolism is the base excision repair (BER). In this mechanism, enzymes known as DNA glycosylases remove damaged bases by literally cutting them out of the DNA strand through cleavage of the covalent bonds between the bases and the sugar-phosphate backbone. The resulting gap is then filled by a specialized repair polymerase and sealed by ligase.

DNA damage also may occur in form of double-strand breaks, which are caused by ionizing radiation, including gamma rays and X-rays. Double-strand breaks may be repaired through one of two mechanisms: nonhomologous end joining (NHEJ), where an enzyme called DNA ligase IV uses overhanging pieces of DNA adjacent to the break to join and fill in the ends; or homologous recombination repair (HRR) where the homologous chromosome itself is used as a template for repair.