Historically, LD50 (Lethal Dose 50%) has been a common dose estimate for acute toxicity. It is a statistically derived maximum dose at which 50% of the group of organisms (rat, mouse, or other species) would be expected to die. LD50 testing is no longer the recommended method for assessing toxicity because of the ethics of using large numbers of animals, the variability of responses in animals and humans, and the use of mortality as the only endpoint. Regulatory agencies use LD50 only if it is justified by scientific necessity and ethical considerations.

The Three Rs
The current practice for estimating acute toxicity emphasizes the following approaches, known as the Three Rs: Other dose estimates also may be used.

Up-and-down-method - Animals are dosed one at a time. If an animal survives, the dose for the next animal is increased; if it dies, the dose is decreased. The up-and-down procedure would require only 6 to 10 animals, provided that the initial estimate of the LD50 is within a factor of two of the true LD50.

Determining the Relative Safety of Pharmaceuticals

Toxicologists, pharmacologists, and others use effective and toxic dose levels to determine the relative safety of pharmaceuticals. As shown in Figure 1, two dose-response curves are presented for the same drug, one for effectiveness and the other for toxicity. In this case, a dose that is 50% to 75% effective does not cause toxicity. However, a 90% effective dose may result in a small amount of toxicity. 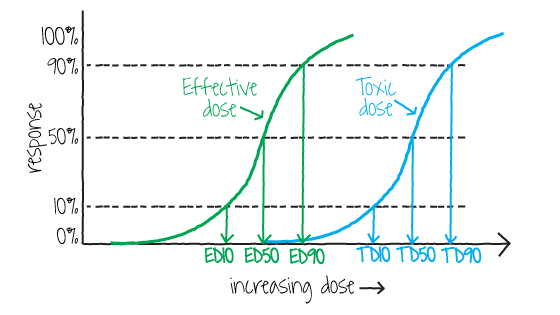