One-Compartment Model
A one-compartment open model may be used for drugs like aminoglycosides which rapidly distribute (equilibrate) to tissues and fluids within the body. In other words, the entire body acts like one uniform compartment. This model is also called a one-compartment open model, with "open" being the assumption that the drug can enter and leave the body via excretion. The figure below shows the disposition of a drug or other substance that distributes instantaneously and evenly in the body, and is eliminated at a rate and amount that is proportional to the amount left in the body. This is known as a "first-order" rate and represented as the logarithm of concentration in blood as a linear function of time (Figure 1). 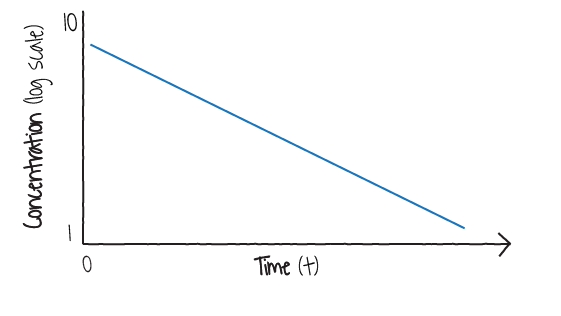 For example, a one-time (bolus) intravenous administration over a short time period could lead to a drug distributing rapidly in the blood and also to highly perfused (by blood) organs like the liver and kidneys. This would be one compartment of the two-compartment model. There would be a slower distribution to other parts of the body as the second compartment. 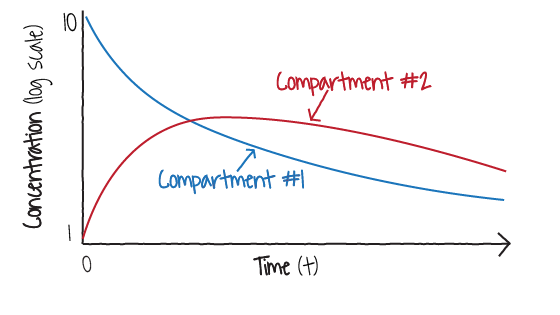 
Multiple Compartment Model
Frequently the one- and two-compartment models cannot adequately describe the kinetics of a chemical within the body since there may be several peripheral body compartments to which the chemical may go, including long-term storage. In addition, biotransformation and elimination of a chemical may not be simple processes but subject to different rates as blood levels change.

1) Disposition models describe:
a) How a toxicant moves within the body over time
b) How the body eliminates the toxicant
c) The pathway for biotransformation of the toxicant within the liver