The route of exposure is an important factor that can affect the concentration of the toxicant (or its metabolites) at any specific location within the blood or lymph. This can be important since the time and path taken by the chemical as it moves through the body influences the degree of biotransformation, storage, and elimination (and thus toxicity).

For example, if a chemical goes to the liver before going to other parts of the body, much of it may be biotransformed quickly. In this case, the blood levels of the toxicant "downstream" may be diminished or eliminated. This way of processing the chemical right away can dramatically affect its potential toxicity.

Gastrointestinal Tract and Peritoneum
When toxicants are absorbed through the gastrointestinal (GI) tract, a similar biotransformation process occurs. Blood carries absorbed toxicants entering the vascular system of the GI tract directly to the liver via the portal system. This is also true for those drugs administered by intraperitoneal injection. Blood from most of the peritoneum also enters the portal system and goes immediately to the liver. Blood from the liver then flows to the heart and then on to the lung, before going to other organs.

Thus, toxicants entering from the GI tract or peritoneum are immediately subject to biotransformation or excretion by the liver and elimination by the lung. This is often referred to as the "first-pass effect."

For example, first-pass biotransformation of the drug propranolol (cardiac depressant) is about 70% when given orally. This means the blood level of this medication is only about 30% of a comparable dose administered intravenously. 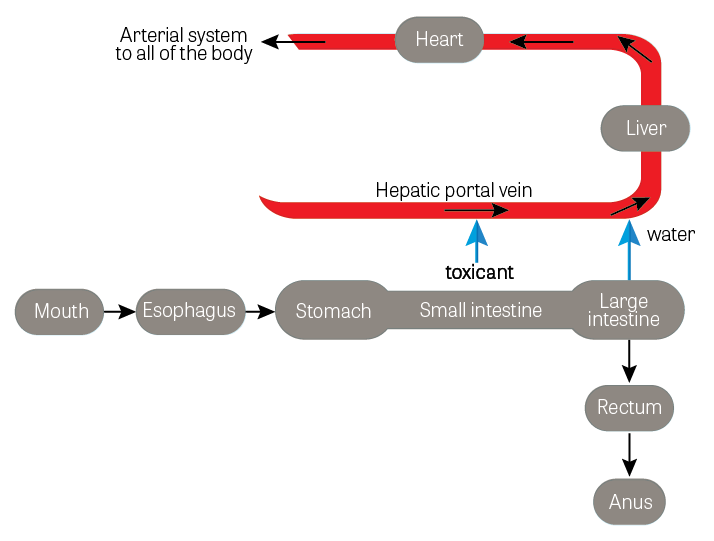 Lymph
The delivery of drugs and bioactive compounds via the lymphatic system avoids first-pass metabolism by the liver and increases oral bioavailability. It is also a way to deliver drugs for diseases that spread through the lymphatic system such as certain types of cancer and the human immunodeficiency virus (HIV). For example, liposomes (see below) composed of phosphatidylethanol can enhance the oral bioavailability of poorly absorbed hydrophilic drugs such as cefotaxime.

Liposomes are small sphere-shaped vesicles which consist of one or more bilayers created from cholesterol and phospholipids. They were first described in the mid-1960s. Liposomes offer several advantages for delivery of some drugs. They:


Blood
The blood levels of a drug or other substance depend on the site of absorption, whether being absorbed after subcutaneous injection or more quickly from intramuscular injection. These blood levels also depend on the individual's rate of local and systemic biotransformation, and the rate of excretion. Uptake and release can occur in areas of the body away from the first site of absorption. Some anesthetics can be taken up by the lungs and later released, impacting blood levels. Lidocaine, given intravenously, is one example of this later release. Further, as noted elsewhere in ToxTutor, the metabolism of a substance can vary widely from person-to-person due to factors such as genetic differences, age, diet, and diseases that affect metabolism.

Some advantages of intramuscular injections:
Knowledge Check (Solutions on next page)