Toxicology is traditionally defined as "the science of poisons." Over time, our understanding of how various agents can cause harm to humans and other organisms has increased, resulting in a more descriptive definition of toxicology as "the study of the adverse effects of chemical, physical, or biological agents on living organisms and the ecosystem, including the prevention and amelioration of such adverse effects."
These adverse effects can take many forms, ranging from immediate death to subtle changes not appreciated until months or years later. They may occur at various levels within the body, such as an organ, a type of cell, or a specific biochemical. Our understanding of how toxic agents damage the body has progressed along with medical knowledge. We now know that various observable changes in anatomic or bodily functions actually result from previously unrecognized changes in specific biochemicals in the body.

Xenobiotic is the general term that is used for a foreign substance taken into the body.  It is derived from the Greek term xeno which means "foreigner." Xenobiotics may produce beneficial effects (such as pharmaceuticals) or they may be toxic (such as lead).

Figure 2. Xenobiotics may produce beneficial effects (such as a pharmaceutical - left) or they may be toxic (such as lead - right)
(Image Source: iStock Photos, ©)
As Paracelsus proposed centuries ago, dose differentiates whether a substance will be a remedy or a poison. A xenobiotic in small amounts may be nontoxic and even beneficial, but when the dose is increased, toxic and lethal effects may result.

The following image provides some examples that illustrate this concept. 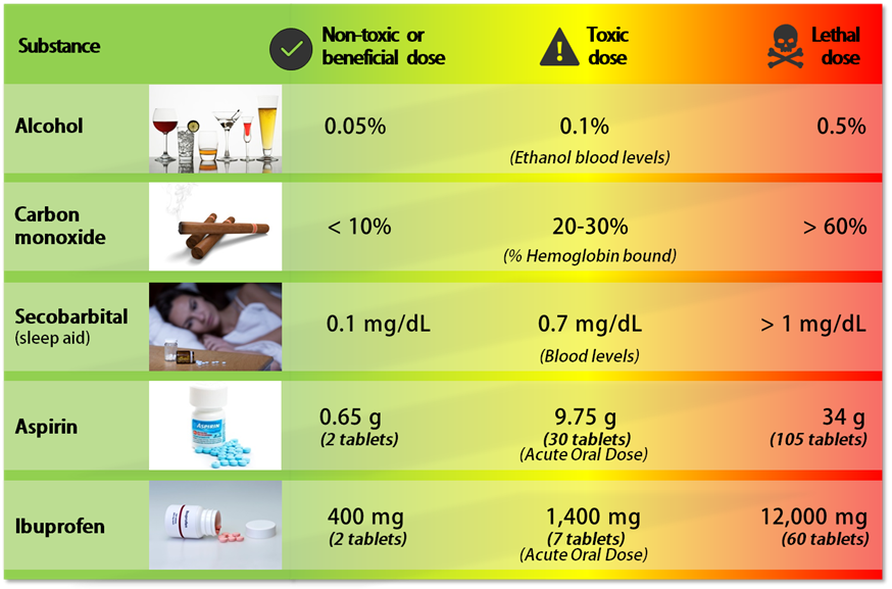