Toxicokinetics is essentially the study of "how a substance gets into the body and what happens to it in the body." Before this term was used, the study of the kinetics (movement) of chemicals was originally conducted with pharmaceuticals and the term pharmacokinetics became commonly used. Similarly, toxicology studies were initially conducted with drugs. Toxicokinetics deals with what the body does with a drug when given a relatively high dose relative to the therapeutic dose. Read more about differences between pharmacokinetics and toxicokinetics.

Factors Determining the Severity of Toxicity

The disposition of a toxicant and its biological reactivity are the factors that determine the severity of toxicity that results when a xenobiotic enters the body. The most important aspects of disposition include:
Here are some examples of how toxicokinetics of a substance can influence its toxicity:

Inter-Related Processes of Absorption, Distribution, Biotransformation, and Elimination
Absorption, distribution, biotransformation, and elimination are inter-related processes as illustrated in Figure 2 below. After the substance is absorbed, it is distributed through the blood, lymph circulation, and extracellular fluids into organs or other storage sites and may be metabolized. Then, the substance or its metabolites are eliminated through the body's waste products. 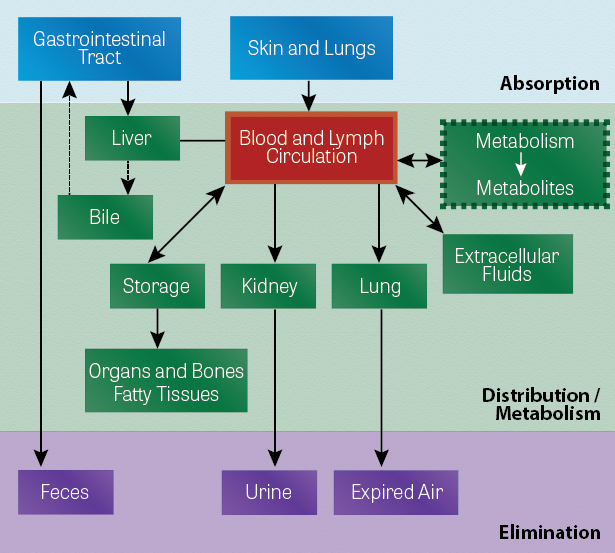 What are Transporters?
Transporters, also called transporter proteins, play an important role in the processes of absorption, distribution, metabolism, and elimination (ADME). They are important to pharmacological, toxicological, clinical, and physiological applications. For example:
The competition of xenobiotics for transporter-related excretion and genetic polymorphisms affecting transporter function affect the likelihood of nephrotoxicity.

Because of concerns that such changes to transporter expression and function can adversely affect clinical outcomes and physiological regulation, increased drug transporter activity is important to study and understand. There is clinical and laboratory research including in vitro, ex vivo, and in vivo studies that shows how powerful drug-drug interactions can be.

For example, drugs might compete with each other for binding to a transporter, which can lead to changes in serum and tissue drug levels and possible side effects.