Testing for and Assessing Toxicity

Alternatives to animal testing have emerged in recent years.

Since about 1990, numerous attempts have been made around the world to reduce the use of and replace laboratory animals in toxicology and other studies. These efforts have involved finding alternatives to animal testing and incorporating the "3Rs" concept (Replace, Reduce and Refine), which means using test methods that:
Regulatory authorities, companies, and others have endorsed the principle of the 3Rs, and alternative testing methods have been and are being developed. An international group that has played a key role is the International Cooperation on Alternative Test Methods (ICATM). Established in 2009, ICATM includes representatives of organizations from various countries as seen below.

Many countries including the United States, Canada, and the European Union member states, require that a comprehensive search for possible alternatives be completed before some or all research involving animals is begun. Because numerous Web resources are now available to provide guidance and other information on in vitro and other alternatives to animal testing, completing such searches and keeping current with information associated with alternatives to animal testing is much easier than it used to be.

NOTE: This information is provided for historical and other reasons, especially since animal testing is still being done in some cases, and because toxicologists, risk assessors, and others are faced with interpreting the results of new and old studies that used animals.
Standardized Animal Toxicity Tests

Animal methods to evaluate toxicity have been developed for a wide variety of toxic effects. Some procedures for routine safety testing have been standardized. Standardized animal toxicity tests have been highly effective in detecting toxicity that may occur in humans. As noted above, concern for animal welfare has resulted in tests that use humane procedures and only as many animals as are needed for statistical reliability.

To be standardized, a test procedure must have scientific acceptance as the most meaningful assay for the toxic effect. Toxicity testing can be very specific for a particular effect, such as dermal irritation, or it may be general, such as testing for unknown chronic effects.

Standardized tests have been developed for the following effects:
Species Selection

Species selection varies with the toxicity test to be performed. There is no single species of animal that can be used for all toxicity tests. Different species may be needed to assess different types of toxicity. The published literature (such as via PubMed) and online databases (such as TOXNET) should be searched for information from non-animal and animal studies, as well as for possible best approaches, most applicable species, and strains and gender of a species. Here are two examples: In some cases, it may not be possible to use the most desirable animal for testing because of animal welfare or cost considerations. Rodents and rabbits are the most commonly used laboratory species because they are readily  available, inexpensive to breed and house, and they have a history of producing reliable results in experiments.

Historically, acute toxicity tests were the first tests conducted. They provide data on the relative toxicity likely to arise from a single or brief exposure, or sometimes multiple doses over a brief period of time. Standardized tests are available for oral, dermal, and inhalation exposures, and many regulatory agencies still require the use of all or some of these tests. Table 1 lists basic parameters historically used in acute toxicity testing.

Subchronic toxicity tests are employed to determine toxicity likely to arise from repeated exposures of several weeks to several months. Standardized tests are available for oral, dermal, and inhalation exposures. Detailed information is obtained during and after the study, ranging from body weight, food and water consumption measurements, effects on eyes and behavior, composition of blood, and microscopic examination of selected tissues and organs.

Chronic toxicity tests determine toxicity from exposure for a substantial portion of a subject's life. They are similar to the subchronic tests except that they extend over a longer period of time and involve larger groups of animals.

Carcinogenicity
Carcinogenicity tests are similar to chronic toxicity tests. However, they extend over a longer period of time and require larger groups of animals in order to assess the potential for cancer.

Table 4 lists basic parameters used in the past in carcinogenicity testing.

Reproductive toxicity testing is intended to determine the effects of substances on gonadal function, conception, birth, and the growth and development of offspring. The oral route of administration is preferable.

Dermal toxicity tests determine the potential for an agent to cause irritation and inflammation of the skin. Those reactions may be a result of direct damage to the skin cells by a substance or an indirect response due to sensitization from prior exposure. In vitro approaches to dermal toxicity testing are being developed, in part because this type of testing has received so much publicity.

Ocular toxicity was at one time determined by applying a test substance for 1 second to the eyes of 6 test animals, usually rabbits. The eyes were then carefully examined for 72 hours, using a magnifying instrument to detect minor effects. An ocular reaction can occur on the cornea, conjunctiva, or iris. It may be simple irritation that is reversible and quickly disappears.
This eye irritation test was commonly known as the "Draize Test." This test has received much attention, such as the development of a "low volume" variation and in vitro approaches.

Genetic toxicity is determined using a wide range of test species including whole animals and plants (for example, rodents, insects, and corn), microorganisms, and mammalian cells. A large variety of tests have been developed to measure gene mutations, chromosome changes, and DNA activity.

Chromosomal effects can be detected with a variety of tests, some of which utilize entire animals (in vivo) and some which use cell systems (in vitro). Several assays are available to test for chemically induced chromosome aberrations in whole animals. Table 10 lists common in vivo means of testing chromosomal effects. 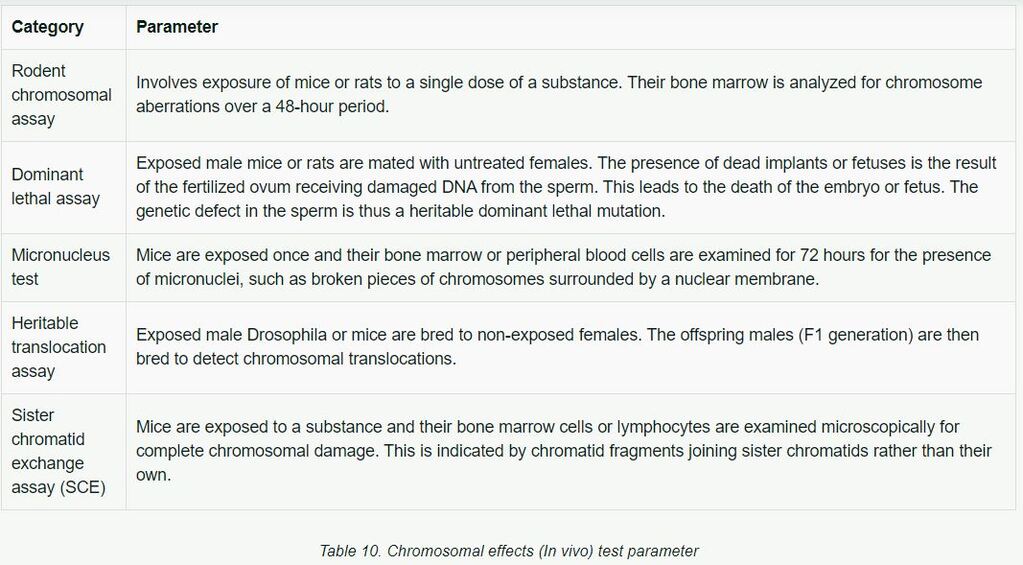 In Vitro Testing
In vitro tests for chromosomal effects involve exposure of cell cultures and followed by microscopic examination of them for chromosome damage.

The most commonly used cell lines are Chinese Hamster Ovary (CHO) cells and human lymphocyte cells. The CHO cells are easy to culture, grow rapidly, and have a low chromosome number (22), which makes for easier identification of chromosome damage.

Human lymphocytes are more difficult to culture. They are obtained from healthy human donors with known medical histories. The results of these assays are potentially more relevant to determine effects of xenobiotics that induce mutations in humans.

Two widely used genotoxicity tests measure DNA damage and repair that is not mutagenicity. DNA damage is considered the first step in the process of mutagenesis. Common assays for detecting DNA damage include:

In the future, there will likely be additional and refined in vitro methods, and the emergence of in silico and "chip" approaches.
Many current efforts are underway to refine, develop, and validate in vitro methods.

Did you know?
The Human Toxicology Project Consortium provides a video series called Pathways to a Better Future. These videos discuss the future of toxicology, if you would like to know more about where the field is headed.


In Silico Methods
Also emerging are in silico methods, meaning "performed on computer or via computer simulation." This term was developed as an analogy to the Latin phrases in vivo and in vitro.

One example is the Virtual Embryo (v-Embryo™) research effort, aimed at developing prediction models to increase our understanding of how chemical exposure may affect unborn children. Researchers are integrating new types of in vitro, in vivo, and in silico models that simulate critical steps in fetal development. Virtual Embryo models simulate biological interactions observed during development and predict chemical disruption of key biological events in pathways that is believed to lead to adverse effects.

Figure 4. v-Embryo logo
"Chip" Models
Also emerging are microphysiological systems (MPS) that are used in "tissue chip" and "organs-on-chips" models. Chip models include human cell cultures that are placed on a computer chip and studied there. The Wyss (pronounced "Veese") Institute for Biologically Inspired Engineering is a helpful resource for more information.

For example, the "Lung-on-a-chip" is described as "combining microfabrication techniques with modern tissue engineering, lung-on-a-chip offers a new in vitro approach to drug screening by mimicking the complicated mechanical and biochemical behaviors of a human lung." To learn more, watch a video from the Wyss Institute that shows a human lung-on-a-chip. Another Wyss Institute video illustrates how researches have used long-on-a-chip to mimic pulmonary edema. 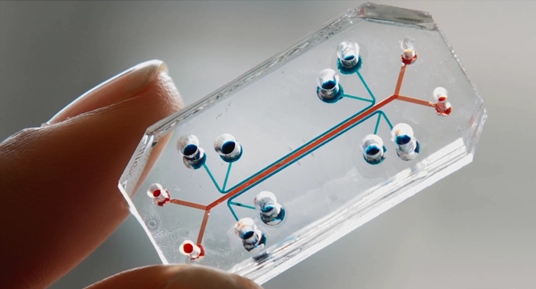 Figure 5. Lung-on-a-chip used to mimic pulmonary edema
(Image Source: The Wyss Institute for Biologically Inspired Engineering)
Using a connected series of tissue chips as an integrated multi-organ system can allow for the creation of a "human-on-a-chip," to be used to model the metabolism and effects of drugs and other substances moving through a human. For example, a liver chip could provide fluids and metabolites to a kidney chip, allowing for the assessment of the nephrotoxic (kidney damage) potential of a substance metabolized in the liver.


Induced Pluripotent Stem Cells (iPSCs)
Induced pluripotent stem cells (iPSCs) are an emerging approach using in vitro cultures of cells. The cells of mammals and plants can be reprogrammed via "cellular reprogramming" to generate iPSCs. Like human embryonic stem cells, iPSCs are pluripotent (capable of giving rise to several different cell types) and these cells can renew themselves. As examples, iPSC-derived hepatocytes, cardiomyocytes, and neural cells can serve as tools for the screening of drugs and other substances for potential toxicity, and also can be used to study disease mechanisms and pathways. Further, iPSCs have been studied in immunotherapy and regenerative cellular therapies. 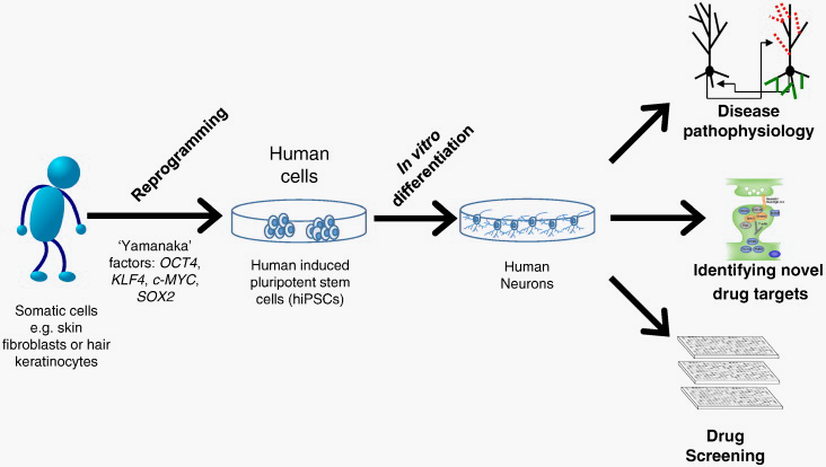 Figure 6. Promise of hiPSCs. Schematic representation of how somatic cells taken from a patient can be reprogrammed into induced pluripotent stem cells (iPSCs) using the ‘Yamanaka’ factors, OCT4, KLF4, c-MYC and SOX2. Subsequent differentiation of human iPSCs (hiPSCs) into neurons of define lineage allow for investigations into disease pathophysiology and identification of potential drug targets. In addition, hiPSC derived neurons may function as a cellular platform in which drug screens can be carried out using disease relevant neurons.
(Image Source: Adapted under Creative Commons Attribution License (CC BY).
doi: 10.1016/j.yhbeh.2015.06.014
Original image: https://www.ncbi.nlm.nih.gov/pmc/articles/PMC4579404/figure/f0005/)
Did you know?
Professor Shinya Yamanaka (Kyoto University, Japan) received the 2012 Nobel Prize in Physiology or Medicine for discovering that mature cells can be reprogrammed to iPSCs that can differentiate into any type of cell. Key to this discovery was his use of four "reprogramming factors" referred to as c-Myc, Klf4, Oct3/4, and Sox2. Learn more


Combining "Chips" and iPSCs
The emerging approaches of "chips" and iPSCs are being combined. One example is for the evaluation of drugs as potential countermeasures for biological and chemical threats that can be a substitute for human clinical trials. The "chips" and "humans on a chip" can be used as complex in vitro human models to simulate the biology and function of an organ.