LEARNING OBJECTIVES
After completing this lesson, you will be able to:
Toxicants can exert their effects systemically or by altering target tissues or organs, and sometimes the patterns of injury left behind can aid in the identification of an unknown toxicant, or at least allow the list of suspects to be narrowed down to a smaller number than the thousands of potential toxicants that exist.  Because most absorbed toxicants are carried in the bloodstream, blood flow patterns often dictate which tissues may be affected.  Within the tissues, variations in cell type and function can also influence the pattern of injury that can be seen with a given toxicant.  Because they receive high volumes of blood flow, and because of their roles in metabolism and excretion of xenobiotics, the liver and kidney are particularly vulnerable to effect from systemically absorbed toxicants.
Patterns of hepatic injury
The microscopic appearance of the liver is that of a hexagonal lobule.  Blood enters the parenchyma from the hepatic artery and portal vein situated, along with a bile duct, at an area termed the portal triad situated at each of the six vertices of the lobule (periportal regions).  From the triad region, the blood passes through endothelial-lined sinusoids that separate anastomosing sheets of hepatocytes before exiting via the terminal hepatic, or central vein (centrilobular region).  Physiologically, the liver has highly oxygenated blood entering at zone 1, which is roughly equivalent to the periportal areas, surrendering its oxygen as it filters through the sinusoids, and reaching zone 3 (centrilobular region) as poorly oxygenated blood that exits via the central vein. Zone 2, also called the midzonal region, is the intermediate area between zones 1 and 3. 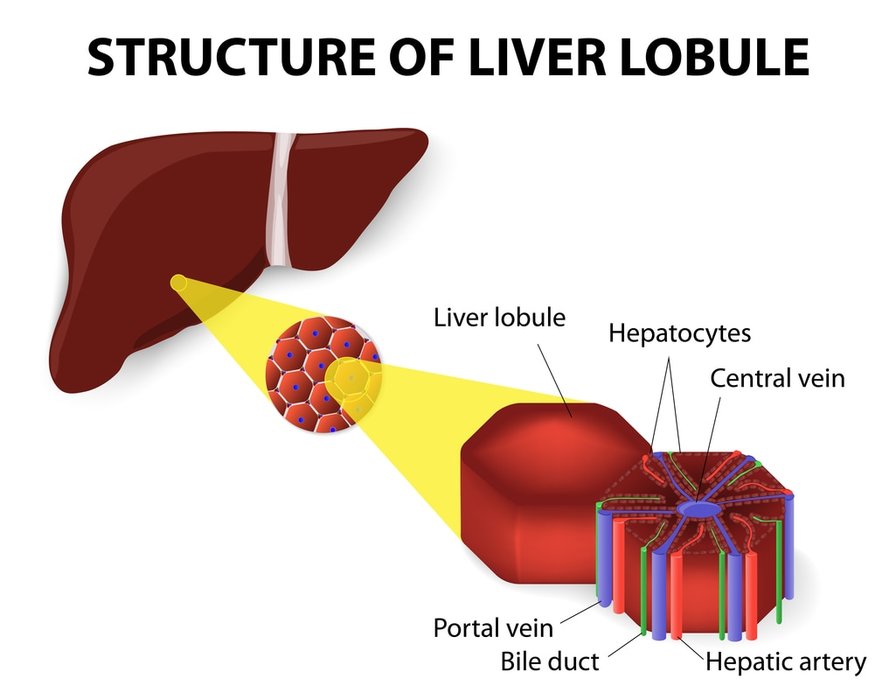 Figure 6.1 Structure of the liver.
Within the different zones of the liver, hepatocytes vary in their physiologic functions, with those in zone 1 being more efficient in oxidative metabolism and zone 3 hepatocytes being efficient at xenobiotic biotransformation. Hepatocytes in zone 1 are the first to be exposed to toxicants that enter the liver; if those toxicants are directly injurious to hepatocytes (e.g. white phosphorus), the pattern of cell injury will be periportal.  Toxicants requiring bioactivation to cause injury (e.g. acetaminophen) will generally cause zone 3 (centrilobular) hepatic injury, since this area contains higher levels of biotransforming enzymes.  This area is also at risk for hypoxic injury due to toxicants that alter oxygen delivery to cells (e.g. carbon monoxide).   Because of these vulnerabilities, centrilobular injury is the most common form of toxicant-induced hepatic injury.  Massive liver necrosis affects entire hepatic lobules, and has been associated with exposure to a variety of toxicants including acetaminophen, aflatoxin, blue-green algae, and hepatotoxic mushrooms.  Piecemeal necrosis is a less commonly seen form of liver injury wherein scattered individual hepatocyte necrosis or apoptosis occurs along the limiting plate between portal triads; this form of hepatic injury has been associated with immune-mediated processes such as is seen with non-steroidal anti-inflammatory drug-induced hepatopathy.

Table 6.1  Some liver toxicants and their patterns of hepatocellular injury
Patterns of renal injury
The nephron is the functional unit of the kidney, consisting of the renal corpuscle (Bowman’s capsule and glomerulus), proximal tubule, loop of Henle, and distal tubules.  Toxicants that are directly injurious may cause damage to the glomerular structures or to the anterior portion of the proximal tubule.  Toxicants that require bioactivation generally cause injury to the more distal section of the proximal renal tubules, as this is where the majority of biotransforming enzymes occur.  As the glomerular filtrate passes through the loop of Henle and distal tubules and becomes more concentrated, toxicants that were too dilute to affect earlier renal structures may cause injury in these more distal sections of the kidney.  Toxicants that decrease renal blood flow (e.g. non-steroidal anti-inflammatory drugs) can also cause injury to more distal tubules, collecting ducts and renal papillae as these regions receive less blood flow than more proximal structures. 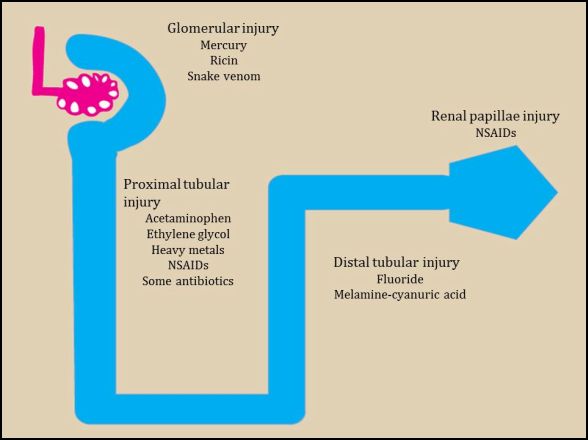 Figure 6.2 Cartoon of a nephron of the kidney demonstrating the different areas that are injured by various toxicants
​Topic 6: Key Points ​
​In this section, we explored the following main points: