The process of DNA replication consists in uncoiling double-stranded DNA, copying each DNA strand and then separating the two, new, double-stranded copies. The process starts at an origin of replication (ori), a nucleic acids sequence where the replication can start. There are around 100,000 origins of replication in each human cell. This means that the DNA replication may starts simultaneously in different positions at the same time. The replication fork is the point where two DNA strands, one termed the leading strand and the other the lagging strand, are separated and DNA copying occurs. The coiled-coil, double-helical DNA structure is initially unwound by the enzyme DNA helicase by breaking the hydrogen bonds between complementary nucleic acids. Single-stranded binding proteins attach to the new DNA strands to keep them separated.

An enzyme termed primase then produces a short strand of RNA to serve as a primer for the remainder of the process.
The enzyme DNA polymerase replicates each DNA strand in the 5′ to 3′ direction by adding the correct, matching nucleotide triphosphate to the 3′-hydroxyl end of the primer strand. As each new nucleic acid is added, a new phosphodiester bond is formed, utilizing the energy contained in the remaining diphosphate group.

This process is continuous on the leading strand but, as DNA polymerase can only add in the 5′ to 3′ direction.
For the lagging strand short chains of nucleic acids, called Okazaki fragments, are generated and the enzyme DNA ligase joins the Okazaki fragments together as lagging strand replication proceeds.
​
The process of replication along the coiled-coil structure of DNA soon leads to an unfavorable DNA conformation that is wound about itself. To relieve this problem, a DNA topoisomerase efficiently cuts the phosphate backbone, “untangles” the DNA strands, and then repairs the cut, leaving the DNA otherwise unaltered. ​
​ 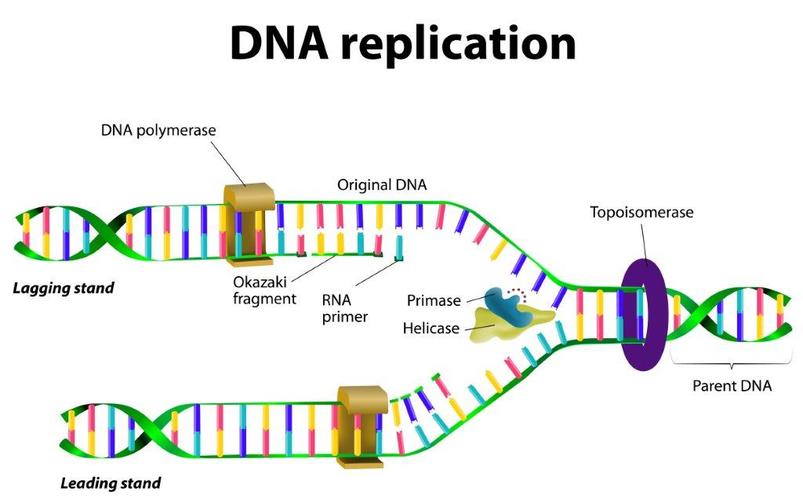