​​Topic 1: What is Pathophysiology?

LEARNING OBJECTIVES
After completing this lesson, you will be able to:
Pathophysiology describes the changes that occur during a disease process, with “patho-“ referring to the physical changes that are observed and “physio-“ referring to the functional processes or mechanisms that occur during a disease process.  In toxicology, pathophysiology encompasses the biochemical and physical alterations that occur upon exposure of an individual (generally termed the “host”) to harmful amounts of a toxicant.  ​

Figure 1.1 Etymology of Pathophysiology
In toxicology, pathophysiology takes into account how the characteristics of the toxicant (for example, dosage, physical properties and chemical properties) and the characteristics of the host (including species, life stage, health/reproductive status, metabolism, and individual sensitivity) interact to produce physical and/or biochemical changes in the host.  Pathophysiology also encompasses the host response to the effects a toxicant.  With acutely lethal intoxications, the physical and chemical injury may be sufficient to cause rapid death of the organism.  In non-lethal toxic exposures, toxicant-induced injury results in dysfunction of cells, tissues and/or organs that may persist or that may progress to death.  Persistent toxic injury that does not result in death generally leads to attempts at repair of toxicant-induced damage.  With some toxicants, the host is able to develop strategies to adapt to continued exposure to toxicants.  Dysfunction, repair and adaptive processes that occur in response to exposure to certain toxicants may trigger development of unregulated cell growth leading to tumor formation in a process termed carcinogenesis. 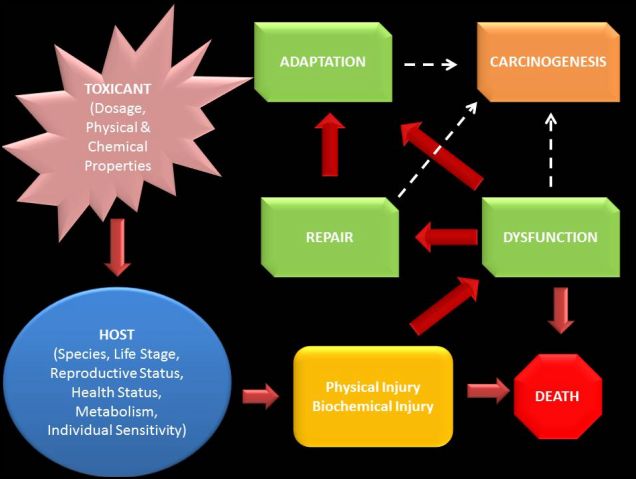 Figure 1.2 Pathophysiology of Toxicants
In many cases the toxicant is the unchanged xenobiotic to which the host was exposed, but in some cases the xenobiotic itself may be relatively innocuous and requires bioactivation to more toxic metabolites before toxic effects occur.  A variety of endogenous systems have evolved to mitigate the effects of many toxicants and/or their metabolites.  However, when these systems fail or when the dose of toxicant exceeds the capacity of the system to neutralize the toxic effects, poisoning occurs.  The clinical syndrome associated with a poisoning is referred to as toxicosis.

Most toxicants exert their effects on specific molecules, tissues or organs based on the physical and chemical makeup of the toxicant as well as the absorption, distribution and metabolism of the toxicant within the body.  Toxicants such as some strong acids or alkalis (e.g. concentrated hydrochloric acid) are not systemically absorbed, so are limited to causing local injury upon contact with skin, eyes or mucous membranes.  Toxicants that are ingested and absorbed from the gastrointestinal tract are shuttled via the portal vein to the liver, where they may cause direct injury, where they may be bioactivated to toxic metabolites, or where they may be detoxified before they reach the general circulation (a process termed “first pass effect”).  Inhaled toxicants such as smoke may cause local tissue injury due irritants or corrosive components as well as systemic intoxication from toxic gases such as carbon monoxide or cyanide.
​Topic 1: Key Points
In this section, we explored the following main points: