In contrast to the thin membranes of the respiratory alveoli and the gastrointestinal villi, the skin is a complex, multilayer tissue. It is relatively impermeable to most ions and aqueous solutions, and serves as a barrier to most xenobiotics.
Entry of Toxicants via Skin
Some notable toxicants can gain entry into the body following skin contamination. For example: The skin consists of three main layers of cells as illustrated in Figure 1: 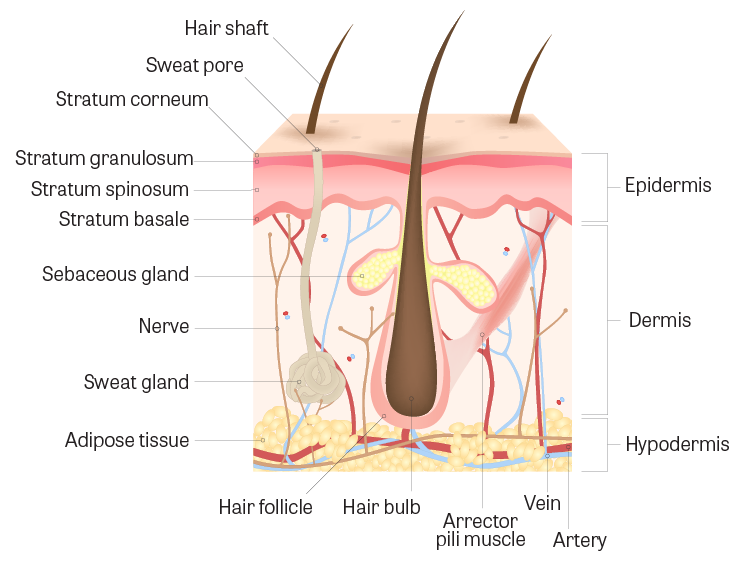 Epidermis and Stratum Corneum
The epidermis (and particularly the stratum corneum) is the only layer that is important in regulating the penetration of a skin contaminant. It consists of an outer layer of cells, packed with keratin, known as the stratum corneum layer. The stratum corneum is devoid of blood vessels. The cell walls of the keratinized cells are apparently double in thickness due to the presence of the keratin, which is chemically resistant and an impenetrable material. The blood vessels are usually about 100 μM from the skin surface. To enter a blood vessel, an agent must pass through several layers of cells that are generally resistant to penetration by chemicals.

Damage
Any process that removes or damages the stratum corneum can enhance penetration of a xenobiotic. Abrasion, scratching, or cuts to the skin will make it more penetrable. Some acids, alkalis, and corrosives can injure the stratum corneum and make it easier for agents to penetrate this layer. The most prevalent skin conditions that enhance dermal absorption are skin burns and dermatitis.

Passive Diffusion
Toxicants move across the stratum corneum by passive diffusion. There are no known active transport mechanisms functioning within the epidermis. Polar and nonpolar toxicants diffuse through the stratum corneum by different mechanisms:
Water
Water plays an important role in dermal absorption. Normally, the stratum corneum is partially hydrated (approximately 7% by weight). Penetration of polar substances is about 10 times more effective than when the skin is completely dry. Additional hydration on the skin's surface increases penetration by 3–5 times, which further increases the ability of a polar compound to penetrate the epidermis.

Other Sites of Dermal Absorption
In addition to the stratum corneum, small amounts of chemicals may be absorbed through the sweat glands, sebaceous glands, and hair follicles. However, since these structures represent only a very small percentage of the skin's total surface area, they are not ordinarily viewed as important contributors to dermal absorption.

Dermis and Subcutaneous Tissue
Once a substance penetrates through the stratum corneum, it enters lower layers of the epidermis, the dermis, and subcutaneous tissue. These layers are far less resistant to further diffusion. They contain a porous, nonselective aqueous diffusion medium which can be penetrated by simple diffusion. Most toxicants that have passed through the stratum corneum can now readily move through the remainder of the skin and enter the circulatory system via the large numbers of venous and lymphatic capillaries in the dermis.

Semivolatile Organic Compounts (SVOCs)
Exposure to semivolatile organic compounds (SVOCs) via the dermal route can occur. The amount of SVOCs absorbed via air-to-skin uptake has been estimated to be comparable to or larger than the amount taken in via inhalation for many SVOCs encountered indoors, including:The influence of particles and dust on dermal exposure, the role of clothing and bedding as transport vectors, and the potential significance of hair follicles as transport shunts through the epidermis are all areas of research interest.
Human exposure to indoor SVOCs through the dermal pathway has often been underestimated and not considered in exposure assessments. However, exposure scientists, risk assessors, and public health officials are increasingly aware of and interested in the health impacts of dermal exposure. Further, experts seek to understand how health consequences can vary by the exposure pathway. For example, an SVOC that enters the blood through the skin does not encounter the same detoxification pathways that it would encounter when ingested and processed by the stomach, intestines, and liver before entering the blood; its direct entry into the blood can make it potentially more toxic. 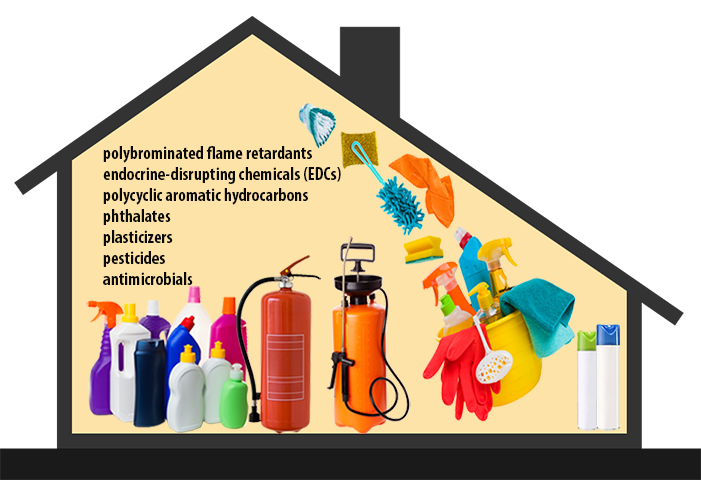 1) The main barrier to dermal absorption is the:
a) Stratum corneum
b) Dermis
c) Subcutaneous tissue

2) The two primary factors that can increase dermal penetration are:
a) Neutralizing pH and aerosolizing
b) Increasing hydration and disruption of the stratum corneum
c) Dehydrating a substance and increasing particle size